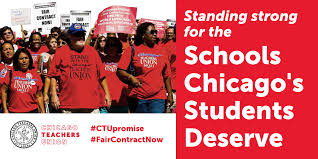 Educators in Chicago are currently working towards getting a new contract that will truly improve our schools for our students. But this past week the Chicago Tribune Editorial Board wrote a piece telling us to “just take the deal” — basically take the money and shut up.

This is the same Editorial Board that had one of its board members write a piece in 2015 wishing for a Hurricane Katrina-type disaster here in Chicago. The article praised the disaster for giving “a great American city a rebirth.” The author, Kristen McQueary, stated “That’s why I find myself praying for a real storm. It’s why I can relate, metaphorically, to the residents of New Orleans climbing onto their rooftops and begging for help and waving their arms and lurching toward rescue helicopters.”

After the Tribune urged us to just take the deal, Chicago Public Schools shared that article on its social media. The message CPS sent its 40,000 educators is you are all a bunch of greedy educators who should just take the money we are offering you.

I’m beyond exhausted of the “greedy teacher” narrative. I’ve been teaching in CPS for 13 years. I’ve been through multiple contract negotiations, the strike of 2012, the Day of Action one day strike in the spring of 2016 and the last minute midnight contract signing in the fall of 2016.

Chicago makes students pay to take the bus to and from school. I’ve watched Chicago steal TIF money designed to go to neighborhoods and schools and put that money to things like private stadiums, the Riverwalk and hotels. I’ve seen CPS vote to give the Chicago Police Department millions of dollars to continue the school to prison pipeline while increasing class sizes and cutting school budgets.

There is and always has been money in Chicago. Money that Chicago should have been using to fully fund and improve its schools for generations.

Now CPS wants us to take the money and trust them to actually, finally help the schools. It doesn’t matter who is in charge of Chicago or CPS, the answer is no, we will never trust you until you put it in writing.

So Chicago, know that the mayor and CPS have a choice to put all of our demands in writing to truly make our schools better or we will shut this city down until they do.

Click here to view this piece on The Chicago Reporter