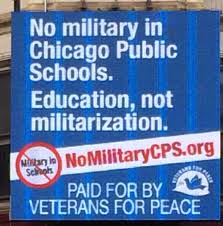 This piece is written by my father, Arnold Stieber. He was Army, Infantry, in the U.S. war against the people of Viet Nam. He is the current Coordinator for the Chicago chapter of Veterans for Peace.

When you look up Memorial Day, you’ll get something like this:  “Memorial Day, an American holiday observed on the last Monday of May, honors men and women who died while in the U.S. military.”

In actuality Memorial Day is more about summer, hot dogs, sales, and in Chicago, about indoctrinating youth into the military model.

In 2013 I attended the Chicago Memorial Day parade with several Veterans For Peace members.  We expected the parade, which is billed as the largest Memorial Day parade in the nation, to be a somber tribute to all those killed in war.  What we saw was over six thousand youth dressed in military uniforms, marching in formation.   They easily made up 80% of the parade.   We were shocked.

Upon investigation we learned that the Chicago Public School system has over 10,000 youth in some form of military training.   No other school system comes close.  We were told that this military training teaches “leadership”, and “discipline” and is a “way out” for many impoverished youth.

Sounds good, but there’s a flaw.  You don’t need to militarize youth to educate them.   Leadership and discipline can be taught in a variety of ways, including in the regular classroom.

By simply providing the public education system with the resources they need the youth will have a “way out”.

To address the myths of the need for militarization the Chicago Chapter of Veterans For Peace started an initiative called Education Not Militarization.  It presents youth with the other side of the story on the military and develops their critical thinking skills.   We have a dedicated web site, a Facebook and Twitter page.   We developed a speakers bureau that is focused on youth.

One of our main speakers is ex-Army Ranger Rory Fanning.  “I signed up to prevent another 9/11, but my two tours in Afghanistan made me realize that I was making the world less safe. We know now that a majority of the million or so people who have been killed since 9/11 have been innocent civilians, people with no stake in the game and no reason to fight until, often enough, the US military baited them into it by killing or injuring a family member who more often than not was an innocent bystander.”  His experiences in Afghanistan woke him up to the realities of the military.  “The Taliban had surrendered a few months before I arrived in Afghanistan in late 2002, but that wasn’t good enough for our politicians back home and the generals giving the orders. Our job was to draw people back into the fight.”

When he left Afghanistan he walked across the United States with 50 pounds on his back for the Pat Tillman Foundation in an obsessive attempt to rid himself of war.   He says, “I began speaking to high school students heavily propagandized by the US military on the charms, delights, and positives of war, American-style, about my own experiences and that, in turn, has been changing my life.“  Rory says, “JROTC’s school-to-military pipeline is a lifeline for Washington’s permanent war across the Greater Middle East and parts of Africa. Its unending conflicts are only possible because kids like those I’ve talked to in the classrooms continue to volunteer.“

Another speaker is ex-Navy aircraft carrier flight captain Sabrina Waller.  She joined the military after high school as a “way out” of the cycle of poverty and violence around her home.  She helped maintain Navy planes on the flight deck of aircraft carriers.  She witnessed the jets carrying 500-pound bombs in their bellies before taking flight. Without exception, they came back empty. “You can’t return to the ship with a bomb,” Waller explains. “It’s too dangerous to land.” The bombs had to be dispatched even without an enemy target to drop them on.” When she began to question these tactics and worried that innocent lives were unjustly being destroyed, her senior shipmates ignored her pleas. “I was told to shut up and not question things and just do my job,”   Sabrina Waller now dedicates her life to sharing her experience with students in the hope that she might prevent them from making the same mistake she did. “I feel like I’ve walked in the shoes that many in the JROTC program will walk in,” Waller says. “They think the military is the only way out of poverty, of not being educated, of not really having a purpose in life, and the only way out of living in depressing communities.”  That doesn’t have to be the case, she tells any young person who will listen.

The Chicago Chapter of Veterans For Peace recently met with the heads of Chicago JROTC.  We both agreed that youth need critical thinking skills.  We suggested that they invite us to speak at the eight military schools and at all of the JROTC and Cadet classes.  They’re thinking about it.   We also asked the Chicago Public School Board to join us in a roundtable discussion of the militarization of youth.  They haven’t responded. 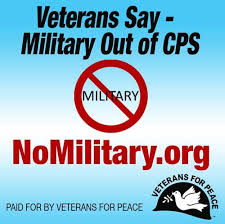 Veterans For Peace will be at this year’s Memorial Day parade to encourage critical thinking.  We’ll pass out stickers to the six thousand militarized youth in the parade.  The stickers are miniatures of the billboards that we’ve placed around Chicago.  They read “No military in Chicago Public Schools.  Education Not Militarization.  NoMilitary.org”.    Hopefully the youth will take the initiative, make good use of the Memorial Day holiday and seek out the other side of the military story.
Now as a Veteran, that’s what I call a real Memorial Day.